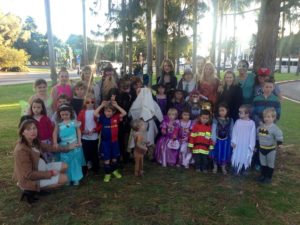 The current weekend school has been operating in San Diego, in the House of Hungary since March 2006. At present, our school provides more than fifty children aged 2 to 15 each month for learning opportunities in different groups.

The initiative started as a playhouse, and children under the age of 10 were engaged in crews. In terms of language knowledge, the group was very mixed with the children from the mother tongue to the children who knew almost a few Hungarian words. After two and a half years, both the school leader and the parents had a need to differentiate between language skills and age. As a result,the Hungarian Sunday School now has six different age/level groups.

Children who speak Hungarian in native or near-mother tongue have been divided into groups according to their age. The group of children attending Kindergarten is familiar with the Hungarian alphabet and begins to study and read in Hungarian. With first and second grade children, we practice writing and reading with playful tasks and games. In the third and fourth grade children and the upper classes, the emphasis on writing and reading is increasingly shifting to Hungarian cultural knowledge and Hungarian history. In each group we put great emphasis on vocabulary development and dissemination of Hungarian traditions and culture. Each group participates different holiday activities and then continue to study in their own group in the remaining time. At Easter and Santa Claus Holidays, all children celebrate together throughout the activities.

Adults can learn Hungarian since the 1980’s in the House of Hungary. Second and third generation descendants of Hungarian immigrants, or just friends or relatives of Hungarians who want to learn the language can have classes every other Saturday morning 9-12 in two classes: beginner and intermediate.  Dedicated teachers prepare students for grammar and conversation.

There are some success stories started in these classes. Shanti Hofshi, an Irish American, attended the classes and later he became one of the teachers in the same school. He is still a member of our House.

Stephen Spinder learned Hungarian dancing, then Hungarian language and now he lives in Transylvania and publishes photo albums. Dennis Engel was also student of this school, now he lives in Hungary and teaches English at the University of Miskolc. He is also our member now.

Come visit, you will have the opportunity to meet your fellow Hungarians and guests from around the world.

Want to be a host or hostess to serve coffee and homemade pastries?

Please pick a Saturday or Sunday and email to host@sdmagyar.org. The Custodian will be there at 11:30 to help you.